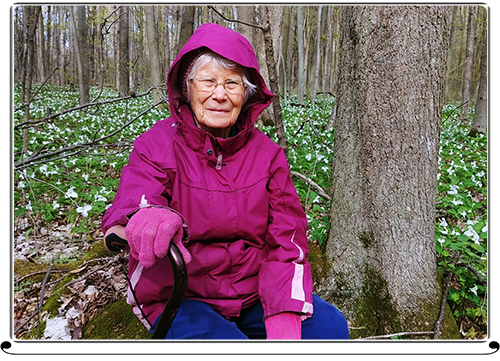 Rosemary Gwendolen (Aikman) Hooker passed away on April 23, 2021
in Ormstown, Québec, peacefully and surrounded by family,
who will forever keep her in their hearts.

Rosemary was born to Gwen and Howard Aikman on September 18, 1933. After graduating from Bishop’s University, she struck off into the world, landing a job as a chemistry, physics and math teacher at Ormstown High School. In Ormstown she met her future husband, Donald and they were married on July 4, 1959.

Rosemary loved her life and community in Ormstown, where she and Don raised their five children. She embraced life on the farm, growing the years’ worth of vegetables (all organic!), looking forward to every flower’s bloom in her gardens, or hiking in the woods with an adored dog, through a carpet of trilliums. She was devoted to her faith and truly enjoyed the community at St. Paul’s United Church where she served as an elder. 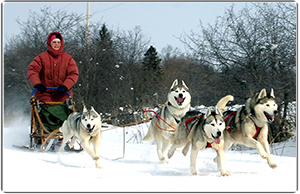 A passion that she and Don shared was their love of raising Siberian Huskies.

Together they travelled from dog show to dog show throughout North America, and from trail to trail, dogsledding over the winter snow, while making many treasured friendships along the way. Her family (and probably her neighbours too) can still hear the song of her Siberian’s gentle howls as they were serenaded to sleep.

Rosemary’s love for the adventure of travel brought her to Europe in the 1950’s with her friend Jean and later to England to reconnect with family, travelling with (daughters) Nancy and Melanie. She and Don, often with their kids in tow, traveled to B.C’s coast, Alaska and the Yukon, throughout much of the United States, to the Maritimes as far as Newfoundland (camping, while in their ‘70s!) and to pretty much all of Canada, in between. 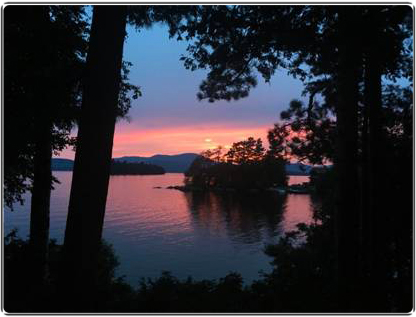 Only the epic events of World War II and the challenges of this past year, kept her away from her treasured Kittemaug Cottage in Vermont, where she spent so many happy summer days enjoying family, the water and her cherished sailing canoe.

There are so many wonderful things to remember about Rosemary, but an ever present theme was her love and devotion to family, to her husband, children and grandchildren, along with fierce pride in her four brothers and affectionate respect for her dear parents. What she gave to family members saw no bounds and was extended to friends who became part of the family.

Rosemary is survived by her husband Don, her son Ian, daughters Nancy (Nick), Liana, Melanie (Ron) and Andrea (Ghislain), her grandchildren Carter, Jennie, Mackenzie, Jackson, Rachel, Benoît and Éllianne, her brothers Bruce (Francine) and Chris (Hennie), her sister-in-law Irma, her sister- and brother-in-law Heather and Dale, many cousins, nieces and nephews. She is predeceased by her brothers John (Irma) and David (Hazel) and sister-in-law Marilyn.